I have been a commercial and fine artist for 45 years.  Over that time I have lived many places, mostly in California and Maui.  During that time I have done over 100 paintings, murals and artsy signs that I have lost track of and have no photo of them either.

I have decided to write a book about my art career and the difficulties an artist faces when they don't come from a wealthy family and have an unlimited budget. While everyone seems to think I should be wealthy because of my artistic abilities they always fail to realize the high cost of doing art.  As an example, to do an art show all the art needs to be matted and/or framed.  The more prestigious the gallery the more expensive the matting and frames need to be.  On Maui I could do enough paintings for a show at a cost of a few hundred dollars.  But to display those painting in a gallery in Lahaina would require a $1500 frame and matting job for each painting to be on par with the rest of the art in the gallery.  This is $18k out of pocket for a show of 12 paintings effectively pricing me out of the market although my art was comparable to the other artists.  the same applies in all the major cities of the world.  Basically if an artist doesn't have money to start with they don't get too far regardless of their talent.  I am finding this true for writing too.  Without a substantial budget to promote your work, you don't get to far.

So over the last 45 years I have painted some very nice art on commission, the only avenue open to me.
Most of these painting were done for private parties but some, most notably my murals and signage were for businesses.

What I am trying to do now, since I lost my portfolios of most of my work over the years, is to use the internet to call for previous clients and businesses who have photos of my work to contact me so I can assemble a master portfolio to include in my new book.

I expect this project to take a few years to complete although I have recently managed to track a few pieces using google, there are still dozens that I need to find, if possible.

So this is a call for those people who I have sold are to in the past 40 or so years to help me create a compilation of my work for posterity.  If you live in California or Maui and have any paintings, mural or signage signed either Beauchamp or Richter, two professional names I've used as an artist please contact  me.

Here's a photo of a mural in a house on Maui I stumbled upon while looking at homes for sale: 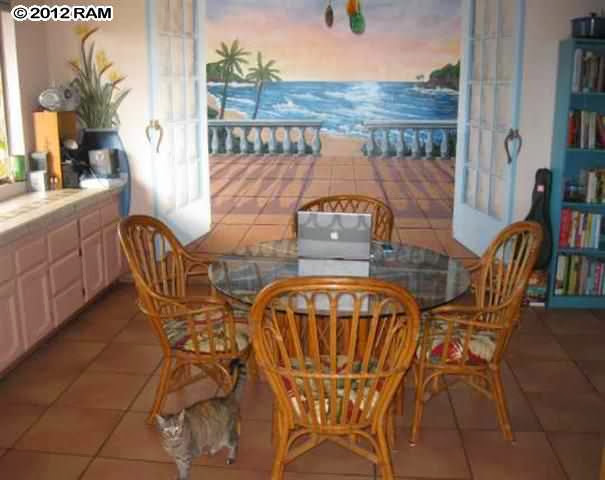 I painted two portraits for Emil White at the Henry Miller Museum  One of Henry and one of Emil.  They seem to have disappeared from the museum.  If anyone has any pictures of them I would love to hear from you.

I also painted a huge mural in Eureka Ca. That I have no photo of.  It was painted in 1989 and has since been altered.  I am trying to find anyone who has a photo of the mural of Venice I painted in Sergio's Italian Restaurant that used to be on 2nd st.

Hopefully I will get some response and be able to gather photos of my life's work.

A Happey little Halloween Tale for my Readers.

The Face Behind My Eyes

I cannot continue in this state of horror. I have been afflicted with a malady, a mental aberration so terrifying that I can see no relief save my own demise. The continued torment and anguish has become unbearable. I have finally deciphered the inscriptions from the site where all my misery began. I cannot bear to endure this knowledge and will, in the hopes of warning others away, commit this to paper before I end my torment. I fear if I wait much longer I will completely lose control of myself and this evil will be free once again in the world.
My sad tale begins in 1934 in the Carpathian Alps. I was on expedition from the Miskatonic University with a group of archeologists investigating rumors of eldritch ruins found high in those grim reaches when the face of a glacier had collapsed and revealed an archway that led deep into the heart of those unnatural peaks.
We started out in a state of great anticipation and excitement, expecting to perhaps make our name in the annals of archeology for discovering some unique remnant of a lost civilization. Fully equipped with the latest gear and the best guides—one the actual discoverer of the ruin—with high spirits.
All went well and in less than a day we reached the entrance after departing the local village on horseback as there were no roads in this area of the range.
The local villagers had legends of some unspeakable evil residing within those peaks but we dismissed it. The locals always have tales of evil in the ruins no matter where in the world one goes.
On our first approach to the archway we were struck by two things. One was the immense size of the aperture and the other the unknown writing that inscribed it.
As we stood at the opening we could see it was no less than thirty feet in height and half as wide. The inscriptions were vaguely familiar appearing to be written in an ancient form of Cyrillic not used for many centuries.
Our first bit of bad luck happened even before we entered. A loud crack was heard overhead and a large icicle broke loose over our guide. Looking up at the sound the guide, mouth agape, was struck by the ice stalactite. It struck him in the open mouth and extended through him while tearing his mandible nearly off, and exited through his back just below the shoulder blades. He stood silently looking at us with his jaw hanging by shreds of skin from his left cheek for several seconds before collapsing to the ground, dead.
I had unfortunately seen such savagery during the great war but several of our expedition were unnerved and a few vomited at the sight.
This set the tone for the entire exploration to the ruins.
We had started out with a compliment of a dozen scientists and twice as many local men to manage the pack animals and camp. We had the men wrap the body in a tarp and sent it down the mountain with a man on horse back so the family could properly inter it according to local customs.
We set up camp and settled in for the night ,each of us reflecting on the terrible accident of the afternoon. We planned to get an early start exploring the ruins that had cost the discoverer his life.

I was never completely well after the events of the expedition and soon after began having dreams, nightmares really, of the thing in the cavern. It would appear in my dreams very close to me as though I was looking in a mirror from a few inches away. I tried to ignore them as they would happen only every fortnight or so.
Meanwhile I endeavored to unravel the writings. Finally with the use of several rare books on dead Eastern European languages I started to make some little progress.
Unfortunately the closer I got to the solution the more frequent and severe the nightmares. The frequency was now so often that I feared sleeping. The face now spoke to me in some inhuman dialect that although I could not understand the words I could grasp that it intended to possess my body and bring its evil back into the world through me.
Thus I have become the wreck I am today. My worst fears are true, the dreams are not just nightmares, but real. Some evil monster is trying to take my body from me and destroy humanity to bring once more its nightmare reign back into to the world.
Today the final piece fell into place. I finally completed the translation. It reads thus:
“Here lies an evil from beyond the stars and outside of time. Do not enter these caverns. We have sacrificed the last of our race to put it to rest here. Do not awaken it.”
I understand now what I must do. In some inexplicable way the green mist contained the essence of this creature and some small part of it lives within me and is trying to gain control. I must not allow that to happen. I only leave this journal to warn others to never open that cavern, never seek to investigate those sinister, evil galleries.

The police were called to the garret of professor James Whyte on Oct. 13, 1937, after the landlady reported the smell of something dead and not having seen the Professor for more than a week. Upon entering the suite they discovered the decomposing body of the professor hanging from the rafters, a pile of note and papers burned in a basin and a journal with the tale above written within. One of the coroners who autopsied the body noted that when the body cavity was opened there was a small wisp of green vapor released that drifted out through the ventilation.

Read my stories on Wattpad